White pozole (pozole blanco) is a traditional Mexican soup that is prepared in some states of Western Mexico. The recipe has ancient origins and is undoubtedly one of the most representative dishes from the country.

Pozole -sometimes spelled posole-; is a traditional Mexican dish whose origin dates back to pre-Hispanic times. At that time, the dish was mainly prepared in the Aztec ceremonies and was only consumed by the Emperor and the highest-ranking priests.

This dish was as special and significant as it was gruesome; because in the preparation was used the flesh of sacrificed warriors in the rites of the Aztec culture.

With the arrival of the Conquest in Mexico, the Spaniards changed these practices and impose the natives to prepare this dish using other types of meat; such as pig and poultry, which are the most common types of meat for white pozole to this day.

The modern recipe is made in various versions that depend on the region where is made. It may include a sauce made with chili peppers which adds not only a different flavor but also a particular red or green color.

Other types of pozole or hominy soups include Red Pozole, Green Chicken Pozole, or even Gallina Pinta, which is a hominy and bean soup with beef.

In Mexico, you will find this dish at any cenaduría (diner) along with other traditional dishes like enchiladas, sopes, and crispy tacos.

But as versatile as it is, white pozole is also offered for breakfast at regional markets, or as a main dish for special occasions like Christmas, New Year’s Eve, Baptisms, and Birthdays.

What Kind Of Corn To Use For White Pozole?

Traditionally, the corn (hominy) used to prepare pozole blanco is one called cacahuazintle. This type of corn is originally from Mexico and has a large white grain, perfect for this type of soup.

Unfortunately, this type of corn is not so easy to find abroad. So my recommendation is to use Peruvian mote corn that looks and tastes similar to Mexican hominy.

Look at Mexican and Latin American stores for corn to make the hominy, you might find one of those two types.

Canned hominy is commonly used to make pozole blanco too. And is also perfect to cut down the preparation because you won’t need to soak the corn overnight but only cook it together with the meat.

There are several brands you can find on Amazon or Mexican online stores, the one in the photo below is what I often use:

What Meat To Use

How To Make White Pozole

The night before you intend to eat this dish, place the corn to soak in plenty of water. The next day you will notice that the corn has softened a bit.

Discard the soaking water and wash the corn thoroughly.

Discard the little brown “heads” on the corn.  If you want the kernels to open (like a flower) then you need to “de-head” the kernels.

De-heading means picking off those little tips (using your fingers) and is mostly a time-consuming step since you have to do it one by one.

You can also skip this step, it won’t compromise the flavor but only the soup texture.

Place the corn in a large pot and cover with about 2-inch (5cm) of water.

Cook for about 3 hours over medium heat, the time will depend on the type of corn you using (Mexican cacahuazintle corn cooks faster than Peruvian mote).

NOTE: If you use canned hominy, you can just rinse it with cold water and start the recipe from here.

Add 2 cups of water (or chicken stock) and blend for 3 minutes or until nicely combined. Strain the mixture and set it aside.

After three hours the corn will start to “bloom” and you will notice because most of the kernels will be popping and the broth will have a thick consistency.

If necessary, (and you will find out in the next step) add more water.

Wash the meat thoroughly, then pat dry it and add it to the pot. Pour in the onions mixture and, if necessary, add more water to cover all ingredients and to allow the meat to cook evenly.

Cook from 2 to 3 hours over medium heat, until the meat and hominy are nicely tender. Adjust salt to taste then turn off the heat.

Remove the meat carefully, place it in a container and cover it. You can also cut it into small chunks or shred it, for easy serving.

Note: If the corn kernels still feel a bit hard, you can continue cooking without the meat inside. Just remember to always adjust salt if you add a little more water.

Once hominy becomes very tender, pozole blanco will be ready. You can serve it as suggested below or store it for later.

How To Serve Pozole Blanco

White pozole is served with different extra toppings that depend on the zone or region where it is prepared.

Also, is very common to serve pozole blanco with tostadas (fried tortillas) or fried potato tacos on the side.

How To Store And Reheat

Before storing, make sure the soup is completely cooled down, then transfer into various or a single container with a tight lid and store in the fridge for up to 4 days or in the freezer for up to 3 months.

Before reheating, thaw and add the hominy soup to a pot, if you think is necessary, add a splash of water to loosen up the broth, then reheat on the stovetop over medium heat. 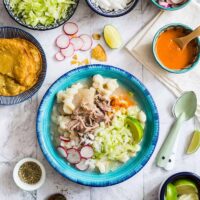 author Maricruz
15
White pozole (pozole blanco) is a traditional Mexican recipe made with hominy, pork meat and spices. This version is not spicy at all but yet is full of flavor.
prep 1 hour
cook 6 hours
resting time 12 hours
total 19 hours
PRINT RATE PIN

A PERSONAL NOTE: A grew up eating pozole blanco. My grandma Elvira owned a cenaduría (a sort of diner) and her recipe was so famous that even to this day, people still talk about it.

My mother loved this soup with lots of spicy salsa and in my family runs the story that I love it too because she ate too much of it when she was pregnant with me.

I knew, since I was a kid, how to make this recipe because is my favorite and also, in my opinion, the best out there.