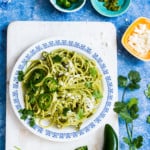 This mexican green spaghetti is made with a creamy and no-spicy poblano sauce. Is traditionally served as a side dish in Mexico but is also a wonderful one pot meal for any weekday dinner.

What is mexican green spaghetti?

The dish is made with green sauce, normally prepared with poblano peppers but it can also use other types of chillies to achieve that color. The taste is mildly sweet with a nice touch of poblano flavor.

Mexican green spaghetti is served mostly as a side dish in special occasions like weddings or big gatherings because that pasta is also very pretty with that particular bright green color.

Not really. Even though poblano peppers are somehow unpredictable, you still can control the spiciness of the sauce by discarding seeds and veins.

Pay special attention when doing this and use gloves to avoid heat from coming in contact with your skin.

Finding fresh poblano pepper is not so easy outside Mexico. But you can also make this spaghetti with a few substitutes of fresh poblano:

Jalapeño peppers. Just remember that this kind of pepper is very hot so you better deseed them pretty well.

Italian peppers (friggitelli). You can find that type of pepper almost all over the world. The taste is very similar to poblano with a small touch of bitterness.

Green bell peppers. This is my first option when friggitelli are not in season here in Italy. Love also that they are a lot easier to peel after roasted and that they’re not spicy at all.

You can make your own mexican sour cream substitute by using regular whole cream and adding a few drops of lime juice (or vinegar) and a sprinkle of salt. Mix and use in the recipe.

Or you can make a mix of 1:1 cream and greek yogurt. This is the method I prefer because the taste is very similar to mexican sour cream.

If you can’t find queso fresco or don’t want to make you own at home. Use Feta or fresh goat cheese.

For fresh cilantro. You can use parsley instead but you don’t want to miss the flavor, so use a bit of dried cilantro as well.

Even though I left you with lots of options for substitutes. Be sure to use just one or two of them. We still want the traditional recipe and missing all the ingredients will make only a regular spaghetti with green creamy sauce instead the mexican version.

Wash throughly the poblano peppers, roast them with the technique you prefer (in the oven, directly on the stove’s fire or on a comal or pan). Put them in a plastic bag or container and then wrap them in a kitchen cloth. Let them sit for 10-15 minutes.

Remove the skin from the peppers, cut them in half, remove all the seeds and remove the veins. Cut them into strips or pieces to make it easier to blend them.

Put the chilies in a blender, add cilantro, the garlic clove and cream. I recommend adding only a small amount of cilantro since the flavour of the poblano is very delicate and if you add so much cilantro it can cover the pepper taste.

Add 1/2 cup of chicken stock or hot water and blend until you get a creamy and homogeneous sauce.

Melt the butter in a medium sauce pan over medium heat. Add the poblano sauce and bring to a boil. Season with salt and pepper then low the heat to a minimum. Simmer for 5 minutes uncovered or until the sauce thickens. Turn off the heat and set aside.

Cook the pasta as indicated in the package. Once cooked drain it and add it directly to the pan with the cream. Add a sprinkle of cheese and mix for a minute to coat evenly then serve with more queso fresco on top.

How to roast peppers

There’s actually a few methods to roast peppers and I have used all of them, so no worries because regardless of what method you use, the recipe will still be delicious.

author Maricruz
4 servings
This Mexican green spaghetti is made with a creamy and no-spicy poblano sauce. Serve as a side with your favorite protein or on its own as a simple and quick dinner with lots of cheese!
prep 10 minutes
cook 20 minutes
total 30 minutes
PRINT RATE PIN