This Mexican caramel (cajeta) is so creamy, soft, and amazingly delicious. It has a deep and slightly smoky flavor, and is made with only 4 ingredients!

Cajeta is a traditional recipe known in English as Mexican caramel. It consists of a sweet and thick sauce made of goat’s milk and sugar.

Its origin comes from the colonial era of New Spain in Mexico. At that time, milk-based sweets were already made using cow’s milk.

However, the Bajío zone was known for its abundance of goat cattle, so it was easier to produce this dessert using that type of milk.

Cajeta has a sweet and smoky taste with hints of cinnamon and vanilla. The texture is smooth, dense, and somehow creamy, very suitable for spreading on bread or cookies.

Its name comes from cajete, a type of box (in Spanish, caja) made of tejamanil which is a very thin and malleable wood. Those little boxes were used to store and sell the dessert, giving the name dulce de cajeta de Tejamanil.

To this day, the dessert is still sold in similar round or long boxes, making them a perfect gift for family and friends.

Even though this traditional dessert is often misrepresented as Mexican Dulce the Leche, the truth is that they’re not the same thing.

The main difference between those two desserts is that the former is made with goat’s milk while dulce de leche is prepared with cow’s milk.

Another big difference is the taste. Dulce de Leche has a caramel-like flavor, while the Mexican dessert has a deeper taste, often because some other ingredients are added and because the preparation is a bit longer.

How To Make Cajeta (Mexican Caramel)

In a medium saucepan, pour the milk, and add sugar, baking soda, and vanilla extract. Place over high heat and bring to a boil.

When the milk comes to a boil, low the heat to medium and cook, stirring constantly to prevent the milk from spilling out.

Use a slotted spoon or a fine strainer to remove some of the foam that forms on top.

As it simmers, the milk will reduce and change its color to a deeper hue. You should play with the heat, if needed raise it a bit, but then lower it again or it will spill out.

After an hour, the milk will have completely changed color, taking the classic brown color and texture of cajeta.

Keep cooking for 5-10 more minutes over high heat to achieve a dense texture.

Once ready, let it rest for about 10 minutes and then transfer it into a container and let it cool completely.

When the preparation has completely cooled down, it will have a thicker consistency, similar to Nutella and perfect for spreading.

Enjoy this Mexican caramel spread on your favorite cookies, or like we do it in Mexico, on a warm bolillo roll paired with pot coffee.

In Mexican cuisine, this preparation is often used to make other recipes such as atole de cajeta, empanadas, or as filling for Coyotas cookies.

If you made it a bit saucy you can pour it over corn ice cream or Mexican flan, it’s so decadent!

Mexican Caramel sauce lasts for up to 2 months in the fridge nicely stored in a glass container with an airtight lid.

If you notice the consistency gets too hard, place the jar in a bowl with hot water for a few minutes and it will become spreadable again.

Watch How To Make It

Did you know? – The state of Guanajuato is known for being the place where the Mexican War of Independence began, so in September 2010 the Cajeta recipe was declared “Dessert of the Mexican Bicentennial”. 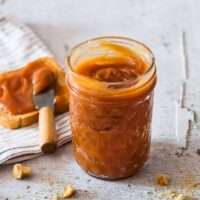 author Maricruz
2 jars (250 gr each)
Mexican Caramel (Cajeta) is a dessert very popular in Mexico. The dish consists of a creamy and sweet preparation perfect to spread over bread or to use as a complement to other desserts.
prep 5 minutes
cook 1 hour 5 minutes
total 1 hour 10 minutes
PRINT RATE PIN

Did you like this traditional Mexican caramel sauce recipe? Then please don’t forget to rate it and leave us a comment below. And also: